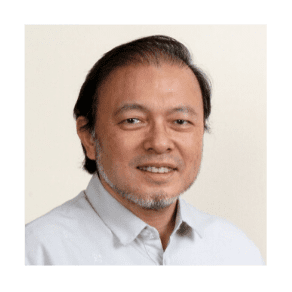 Ric Saludo has done strategic and risk assessment for decades, first as editor-writer with Asiaweek Magazine (1984-2001), covering business and governance, then as Philippine Cabinet Secretary, Civil Service Commission chairman, and Presidential Spokesperson (2002-10) under then President Gloria Arroyo, and now as managing director and consultant of the Center for Strategy, Enterprise & Intelligence (CenSEI).

He holds an MSc in Public Policy and Management from the School of Oriental and African Studies, University of London; a Diploma in Strategy and Innovation from Oxford’s Said Business School; and certificates in business leadership, change leadership, and financial management from Cornell University.

Drawing on his Cabinet experience and graduate learning, Ric co-wrote a book on crisis management in the Arroyo administration, titled BEATING THE ODDS: The Philippines stands up to terror, drugs, dreadful disease, coup d’etat, economic storms and intractable conflict. He is adjunct faculty with the Ateneo School of Government and the Asian Center for Journalism, also at the Ateneo de Manila University.

Ric’s advisory work encompasses national governance and security, media relations and management, international relations, and business. Along with his advisory and academic work, Ric is a columnist with The Manila Times, covering public affairs, geopolitics, and religion. He served the Philippine government, particularly the executive branch, in various capacities: Head of the Presidential Management Staff, Cabinet Secretary, and Deputy Presidential Spokesperson to then President Gloria Macapagal-Arroyo. Saludo worked as a senior business editor of AsiaWeek from 1989 to 1995. He later became a commentator of Asia Affairs for CNN and CNBC news networks in 1995 until 2001. He also worked as the Assistant Managing Director of AsiaWeek magazine from 1996 to 2001. In 2002, he left the private sector to join the Arroyo administration.

Presently, he is the Managing Director and co-founder, along with fellow former presidential spokesperson Sec. Gary Olivar, of the Center for Strategy, Enterprise, and Intelligence, a management and media consultancy firm.[2] He is also a lecturer at the National College of Public Administration and Governance (NCPAG) of the University of the Philippines. He teaches the course The Administrator, in the Philippine Public Service.

© 2022 | Risk Beyond by ERMA Pte Ltd, All Rights Reserved
Risk Beyond 2021 is proudly hosted by ERMA - Enterprise Risk Management Academy.